How small is the smallest jigsaw puzzle? 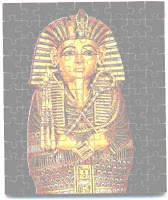 Along the same theme, how small is the smallest jigsaw?
Small can mean many things, but one candidate is “King Tut,” a wooden puzzle, approximately 6.55cm x 5.5cm, made by KARNAN, in Sweden that has about 90 pieces.
Posted by Jigsaw Joy at 5:49 PM No comments: Links to this post

How old is the oldest jigsaw puzzle?

This is a question I was asked recently, which set me to doing some research...
The Oldest Jigsaws, or dissected puzzles as they were then called, were the dissected maps made by John Spilsbury, map maker and owner of a print shop in Russell Court, London. He was born in Worcester in 1739 and Linda Hannas' book ' The English Jigsaw Puzzle 1760-1890' gives a detailed account of his life.

In 1787 William Darton was the first to dissect a chronological table of English Sovereigns with the grand title 'Engravings for Teaching the Elements of English History and Chronology after the manner of Dissected Maps for Teaching Geography.' The puzzle was as boring as the title, and the next year his rival and neighbor, John Wallis produced a lighter version that went on selling for the next ten years.

I'd love to hear from you if you can add any further thought to this discussion.
Posted by Jigsaw Joy at 1:55 PM No comments: Links to this post

Jigsaw Joy
We just love jigsaws and want to talk about and share the joys of jigsaws with others who also enjoy them. We have done hundreds of jigsaws over the years, and always have one on the go. We own Pathway Puzzles, New Zealand's only specialist online jigsaw puzzle store where we have hundreds of jigsaws for sale. We regularly add new jigsaws to our stock. We invite you to comment on our blog, and let us know what you like and dislike about jigsaws. We want to provide you with the best in jigsaws and jigsaw accessories.